All ONCE techniques and engineering approaches require the understanding of the mechanisms of ocean carbon fixation, sequestration and storage. The major mechanisms of the ocean’s absorption of atmospheric CO2 include the solubility pump, the carbonate pump (CCP), the biological pump (BCP), and the recently proposed microbial carbon pump (MCP).

The solubility pump depends on the deference of partial pressure of CO2 between atmosphere over seawater, and consequetn transport into the ocean interior. The high-density seawater caused by low temperature and high salinity, in particular, transports CO2 absorbed by air-sea exchange into the deep sea and enters the Millennium scale carbon cycle, resulting in carbon storage in the ocean (Raven and Falkowski, 1999). The Carbonate Pump is driven by calcifying organisms (organisms that produce calcium carbonate shells) as well as seawater CO2 system equilibrium and carbonate precipitation and sedimentation (Volk and Hoffert, 1985). It is worth noting that the precipitation of carbonate will release equivalent CO2, that’s why it is also called carbonate counter pump (CCP). Only deposition of carbonate into the sediment constitutes carbon storage (Elderfield, 2002). Mcrobially driven authigenic carbonates in the sediment cannot be ignored. 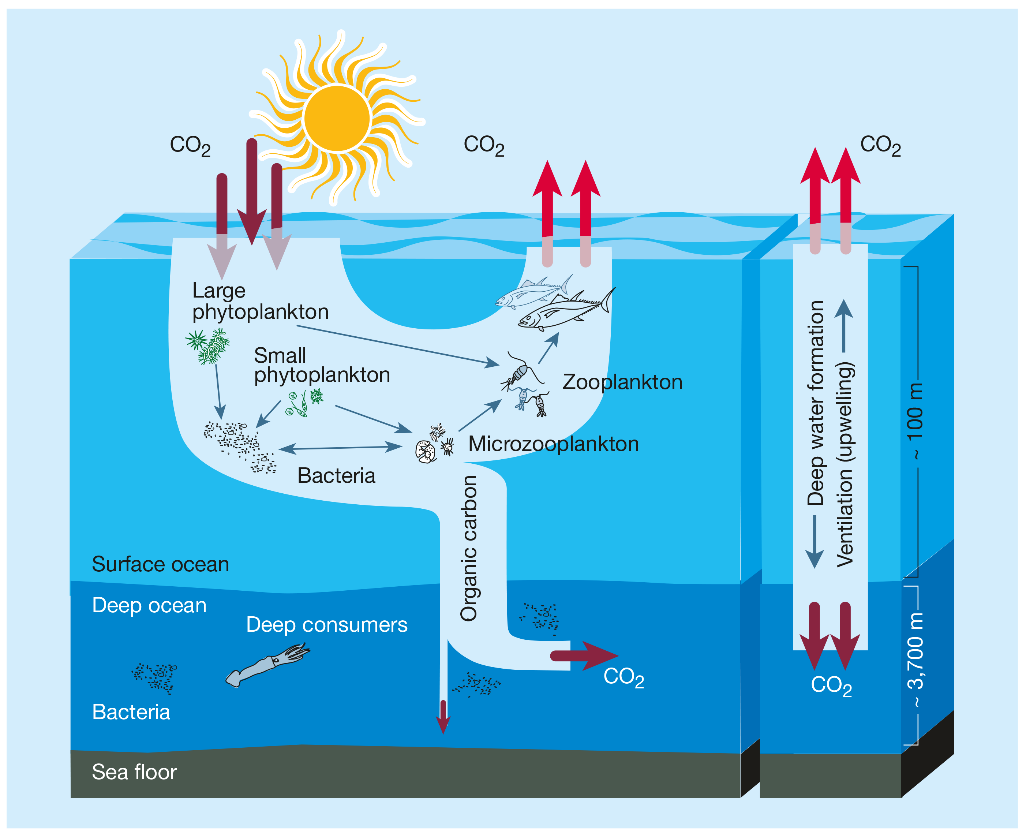 Figure. The biological pump and the solubility pump in the ocean (Chisholm, 2000).

However, decades of studies have realized that the flux of POC initiated by the biological pump into the deep sea is limited. The amount of organic carbon buried at the bottom of the sea is only about 0.1-1% of the primary production. The majority of POC is degraded and converted into CO2 through respiration during sedimentation. In fact, most of the organic carbon in the ocean exists in the form of dissolved organic carbon (DOC), which is as high as 97% of the total organic carbon in the world oceans. About 95% of DOC is recalcitrant dissolved organic carbon (RDOC), which is resistant to use by organisms. The huge marine RDOC pool (about 650 × 109 tons) is comparable to the total atmospheric carbon inventory. 14C isotope dating analysis further showed that the age of RDOC in the ocean is 4000 ~ 6000 years, which constitutes the long-term carbon storage of the ocean. But how it was formed remained as a “enigma” (Barber, 1968) until the "microbial carbon pump (MCP)" concept was proposed (Jiao et al., 2010). The MCP is a new mechanism of marine carbon sequestration recognized from in-depth research in the past decades, which featured by its independency of vertical transport, RDOC can be produced via MCP at any depths in the water column (Fig.1). A resent large volume experimental study at the ecosystem level verified the high efficacy of the MCP for production of RDOC (Jiao et al., 2018). 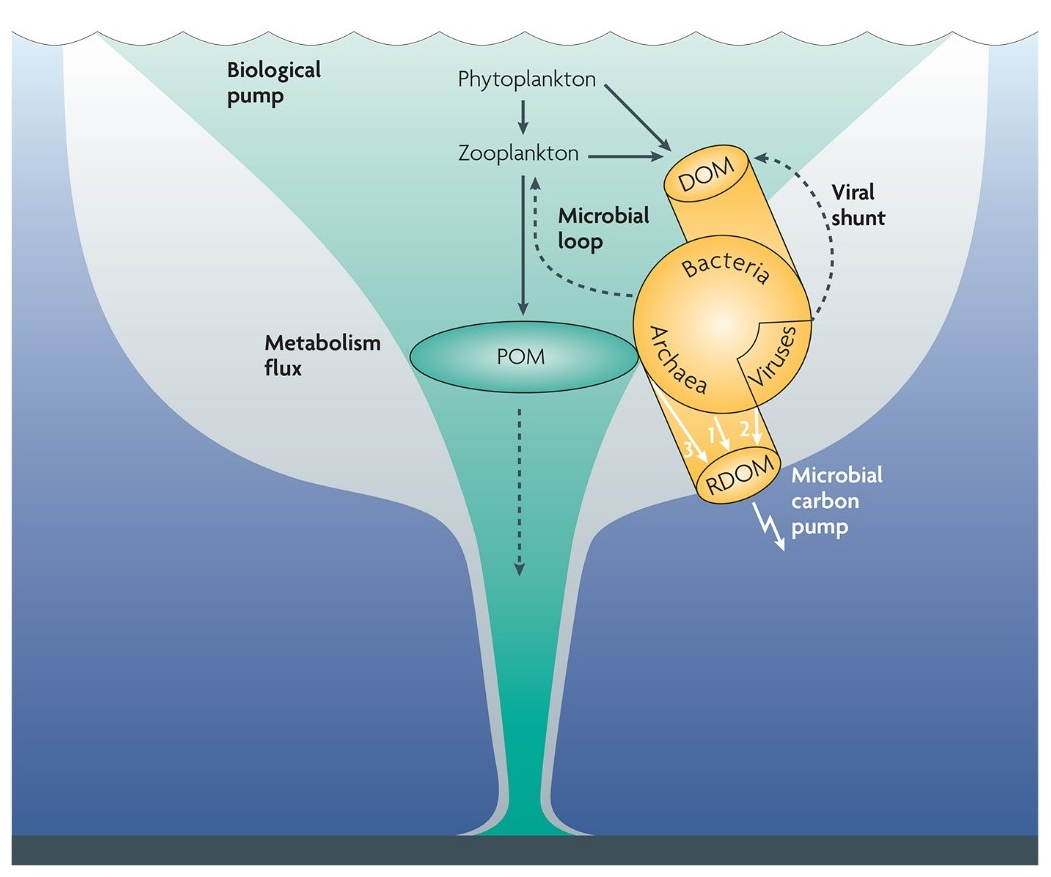 Figure. Major biological processes involved in carbon cycling and sequstraion in the ocean, including the biological pump and the microbial carbon pump, (Jiao et al., 2010).

The nature and controls of dissolved organic carbon in the ocean

Most of the dissolved organic carbon (DOC) produced by photosynthesis is labile and can be remineralized or assimilated by microbes within minutes to a few days. The remaining DOC can be gradually degraded and transformed by microbes and abiotic processes to a huge variety of new compounds with residence times from days to months, decades, hundreds and even thousands of years. The oceanic DOC pool has been classified into two major classes: labile DOC (LDOC) which does not accumulate in the ocean due to rapid microbial turnover, and recalcitrant DOC (RDOC) which serves as a reservoir until its eventual removal. In some studies, RDOC is subdivided into fractions defined by their lifetimes: semilabile (∼ 1.5 years), semi-refractory (∼ 20 years), refractory (∼ 16 000 years) and ultra-refractory (∼ 40 000 years). Obviously, there are major gaps between the timescales describing the recalcitrance of RDOC, to say nothing of the difference in definitions between scientific disciplines. While geochemists can define RDOC according to the 14C age on timescales of thousands of years and modelers use the turnover rates as the basis of their definition for the different types of RDOC, microbiologists may identify RDOC according to the absence of the genes that encode the enzymes required to metabolize the specific RDOC compound with no link to the timescale required. Such differences were not identified and addressed to ensure the interdisciplinary collaborations needed for a comprehensive understanding of the interactions between microbes and their geochemical environment and the consequences of microbial processing of carbon on outgassing of CO2 and carbon sequestration.

It is puzzling that how RDOC can age to thousands of years in the ocean. Jiao et al., 2014 first proposed that RDOC can be classified into two categories, environmental context-dependent RDOCt and concentration-constrained RDOC (RDOCc). RDOCt would be recalcitrant in a given biogeochemical context but could become accessible to microbial degradation in a different context; RDOCc would be composed of molecules at extremely low individual concentrations, which are below the corresponding microbial uptake thresholds. Therefore, as long as the environmental conditions keep unchanged significantly, RDOCt ages; And as long as the concentrations of organic compounds are below their corresponding microbial uptake thresholds, RDOCc age. This clarified the nature of RDOC under different conditions. Both RDOCt and RDOCc are derived from the microbial carbon pump (MCP). It is the MCP successive processing of organic matters that produce RDOC and put carbon cycling into a slow cycling mechanism which store carbon in the water column while RDOC is aging (Fig.2). 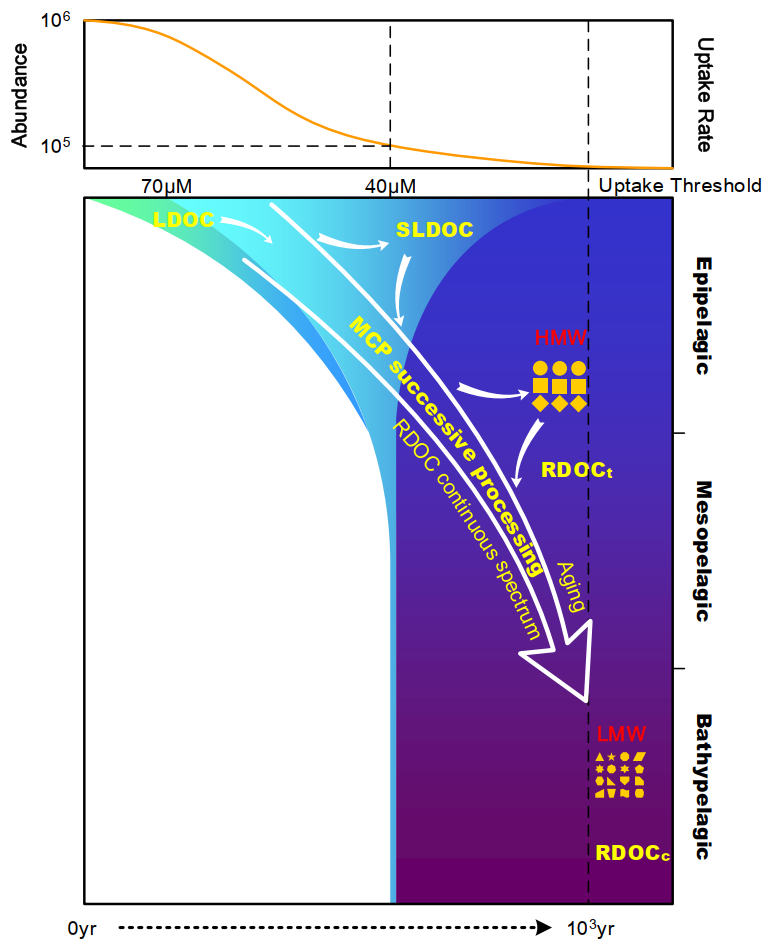 Interactions between POC and RDOC sequestration

Aggregating and scavenging processes are common in the sea water column. While POC is degraded rapidly along its sinking process. Organic particles can also be nuclei for RDOC molecules to attach to or aggregate with (Jiao et al., 2014). If the POC particles scavenge enough RDOC molecules, they could become “coated” with RDOC. Thus POC can be protected by RDOC. Otherwise, POC can be even further decradated as it is relatively labile. In the case of “RDOC-coated POC”,  it theoretically become further resistant to microbial attack. RDOC molecules in the deep sea can also aggregate to form recalcitrant POC and can safely reach the seabed where it can be buried for millions of years (Fig.3).

The “RDOC coating process” reveals a potential bias in 14C dating. As indicated in the above, assuming the average age of RDOC is 5000 year, a 1 year old POC particle landing at the seabed could be falsely dated as 50–2500 year old depending on its size (0.01–1 mm) by the assumed scavenge probability. In fact, one of the loss processes of RDOC in the water column is aggregation that ultimately leads to transfer of aged organic carbon as POC to the sediment. 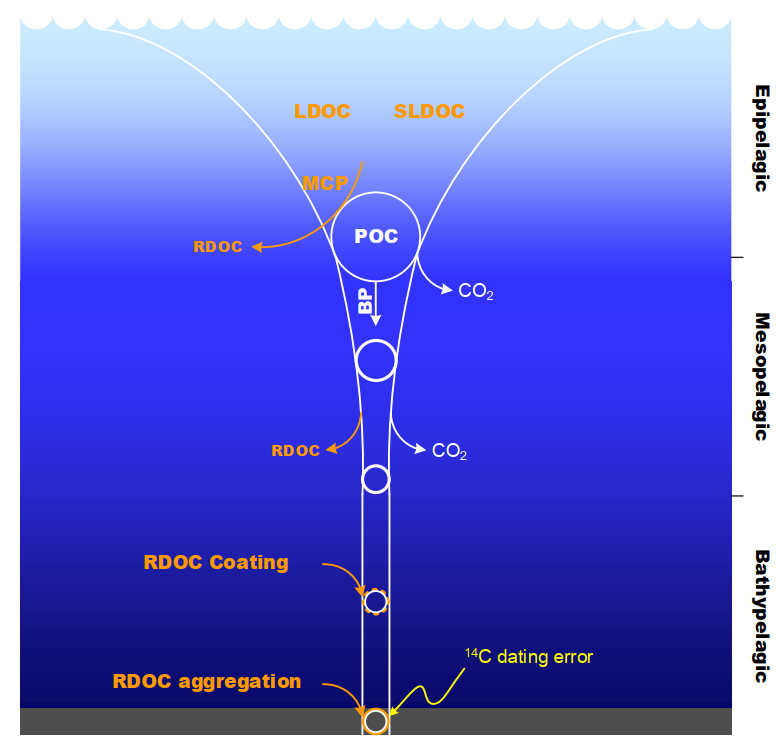 Figure. Transformation of DOC and POC through decomposition and scavenging processes that could influence carbon sequestration and 14C dating. (Jiao et al., 2014)

Based on the MCP theory, we put forward an ecological engineering strategy of reduce emissions and increase sinks of CO2, i.e., Increase carbon sinks in eutrophic coastal waters by reducing excessive fertilization on the land (Jiao et al., 2011). In the past decades, chemical fertilization in the world has been in crease 30%. Excessive nitrogen and phosphorus are washed out from farms into rivers and ultimately into the sea making estuarine water eutrophic, which not only cause environmental problems but also reduce carbon sink in the coastal waters (Jiao et al., 2008, 2011). Data collected by American and European scientists from various natural environments and the results of river experiments further confirm this view (Taylor and Townsend, 2010).   Therefore, "Land and Sea Coordination" management is a practical and feasible way to increase carbon storage while mitigating environmental risk. It also provide a quantitative basis for the existing ecological compensation policy in China, which help to implement a low-carbon economy and sustainable development. 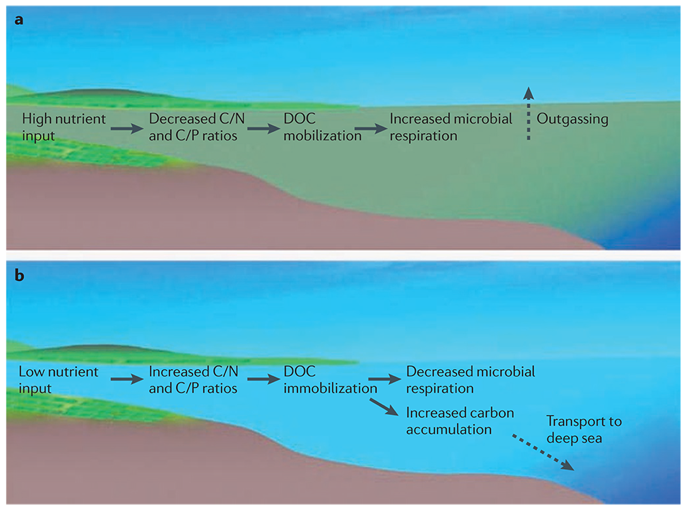 The study of molecular geobiology aims to explore the interaction and co-evolution between life and environment in Earth history by investigations on the microbial lipid biomarkers extracted from ancient rocks deposited in marine and oceans, in particular those of microbialites (microbial sediments including stromatolites as shown by the outcrop photos below). Through the integration and comparison of modern days with critical periods of Earth history, the investigations on coupled carbon, nitrogen and sulfur cycles will be conducted to decipher the mechanisms of marine carbon storage, biogeochemical processes in response to climate change, and their impacts on ecosystems.

Three time intervals are selected to decipher the relationship between climate, biogeochemical cycles, oceanic chemistry and ecosystems, including the last deglaciation, the Permian-Triassic boundary at 252 million years ago when the most severe mass extinction occurred in association with the sharp increase of temperature, and the Neoproterozoic age of 630 million years ago when the snowball Earth episode terminated. Key issues include 1) the coupling of carbon, nitrogen and sulfur cycles, 2) the microbial contribution to changes in oceanic chemistry, and 3) the response of elemental biogeochemistry cycles to global changes and their impact on ecosystems.

Core samples in the South China Sea will be recovered for the investigation on the last deglaciation. Typical geological sections in the South China will be studied for the time period of geological history (i.e., 250 and 630 million years ago) to unravel the relationship among climate, carbon cycle, oceanic chemistry and ecosystems. Paleotemperature reconstruction is to be achieved by the measurement of oxygen isotope composition in apatite of conodont fossils,r47 of carbonate or lipid biomarkers. Analysis of carbon, nitrogen, sulphur and boron isotope compositions, along with inorganic geochemistry, will be conducted to show the variations of carbon cycle and oceanic chemistry (i.e., anoxia, euxinia, and acidification). The microbial community will be evaluated by analyzing the records of lipid biomarkers preserved in sedimentary rocks.

This field focuses on tropical carbon cycle and western boundary currents in west Pacific marginal seas and the Warm Pool area, and explores the role of the seas in global evolution of climatic environment and its impact on China. Concurrent with studies of deep sea sedimentary records are attempts of modern process observation and numerical modeling of environmental changes. 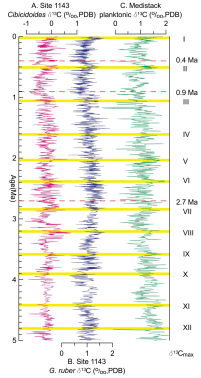 Involved with the Integrated Ocean Drilling Program and the International Ocean Discovery Program (IODP), this field focuses on research areas about the tracing geochemical proxies in paleoceanography, the deep sea microorganism and their biogeochemical impacts, and exploring submarine geology and mineralization mechanism and issues related to carbon cycle and biological evolution.

Integrating marine science and geology, this field explores weathering and erosion, mass transport and the “source to sink” process of sedimentation. Other researches include observing and analyzing the sedimentary dynamic process and mechanism in the deep sea and exploring the coupling relationship among tectonic uplift, climate change, weathering-erosion process at the provenances. 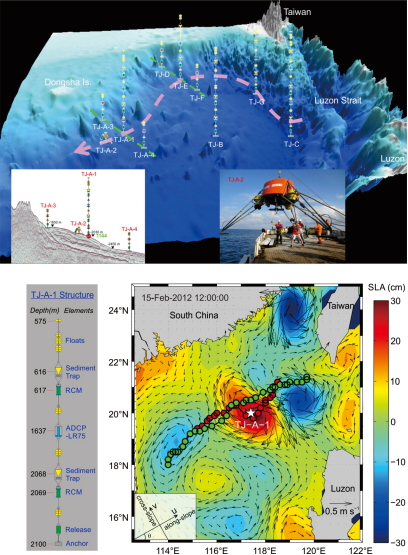