ONCE offer a variety of workshops and training programmes, and professional field trips support for specialists and students who are keen to research and study areas related to negative carbon emissions in the ocean content. 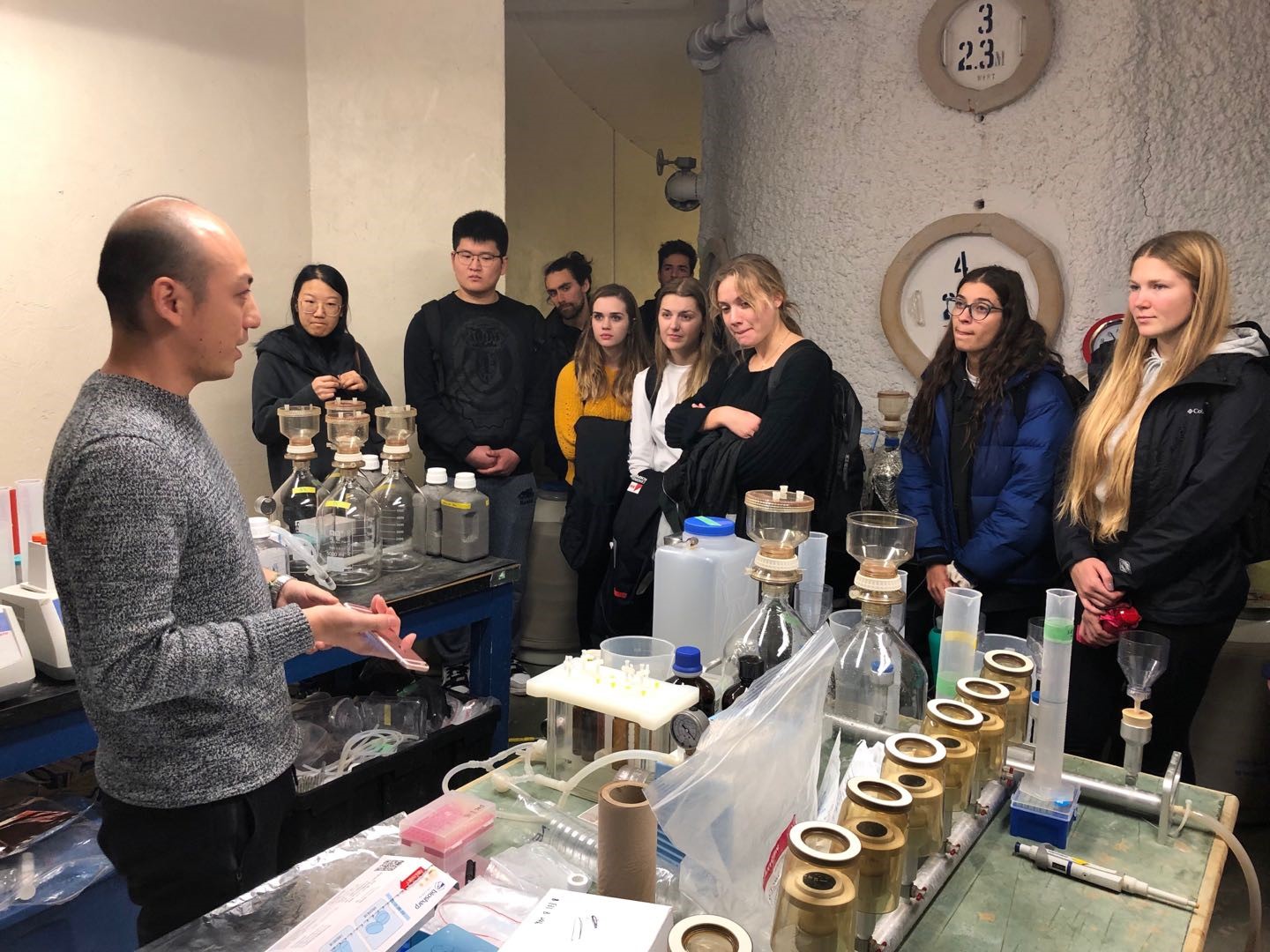 The experiment training courses and workshops are designed to introduce to the participants both some theoretical frameworks most research rely on and hands-on requirements necessary for students to run and conduct the ONCE relevant research. Also, the instrument and facilities commonly employed are introduced. These sessions are offered both monthly and annually and are open to various audiences including undergraduate students, professionals and laymen. ONCE provided an international study of ecological simulation at home and abroad (Fig.1) and laboratory observation projects including sample analysis（Fig.2） and 'Bacterial-Viral Model' introduction（Fig.3）, etc.

Personal visits to our labs are open with reservation and registration in advance, and the receivers will provide visitors related guidance and supervisions to ensure the safety of laboratories and the visitors themselves. The visiting sessions would include some general introduction to the marine biogeochemistry process, ongoing research programs, the facilities and instruments employed, with a particular focus on ecological simulation studies and field observations. 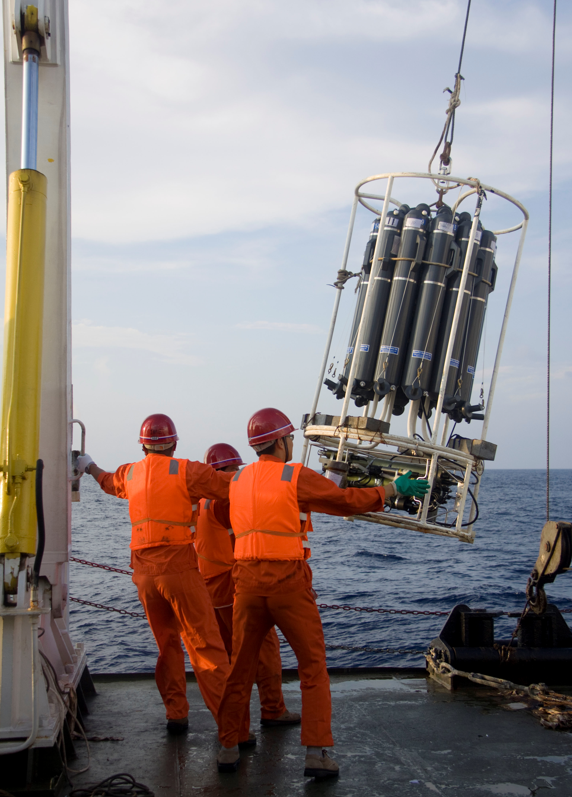 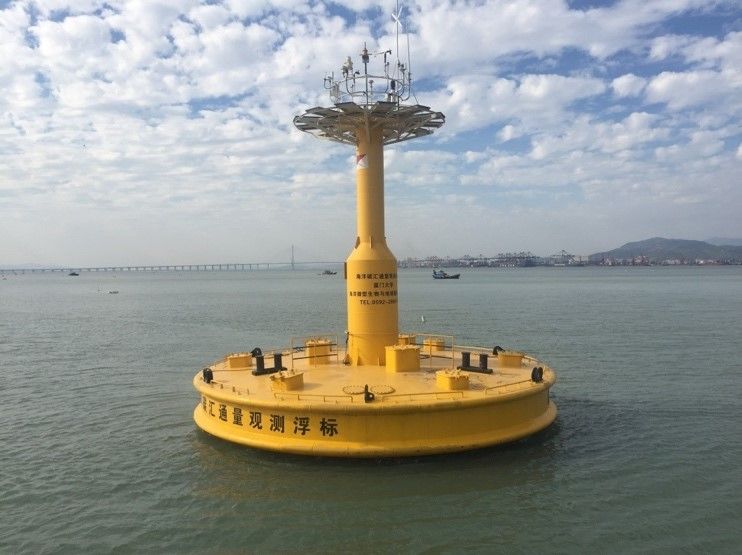 Employing long-term time-series observations for exploring ONCE approaches are innovative. Thus, for the long-term time-series observations we established in the Xiamen Bay (Fig. 4), we welcome participants from cross-disciplinary backgrounds to visit and take a part by joining the cruises. The data acquired in situ would greatly complement the data obtained in labs, playing important roles in the study of marine carbon sinks.

The workshops on investigation on the possibility to set up global network of ocean time-series stations are in preparation. We envision that a global network of ocean time-series stations not only for observations but also for understanding ONCE processes by deliberately planning for them to be sites for experimentation / intervention can be constructed and make full use.

As the majority of archaeal and bacterial diversity remains uncultured（may be more than 99%） and poorly characterized, culturing and taxonomy are of priority. The growing demand for efficient cultivation strategies has led to rapid advances in the methodologies and technological development.

Traditional microbiological methods (Fig. 8) have been important and indispensable assets for cultivation, and researchers have successfully isolated numerous microorganisms of interest with these methods. However, the limitations of approaches such as large time-consuming, and the tedious prerequisites for tests on media combinations and of different physicochemical conditions. So far, newly developed approaches (Fig. 9) have shown the great potential for microbial isolation and the efficient determination of suitable culture conditions, although some remain at early stages and are developed upon conventional methods,.

The development and maturation of characteristics analysis have been achieved all over the world. The systematic survey includes morphological observation, biochemical characterization, antibiotic sensitivities, cell components, gene sequencing, and genomic characters. 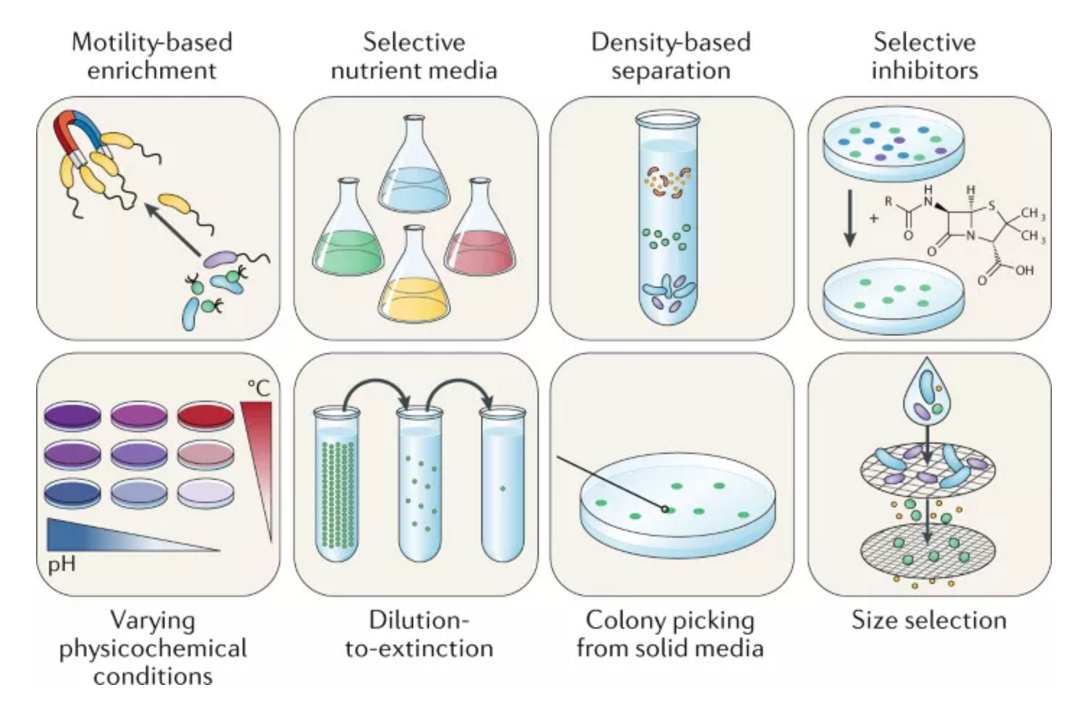 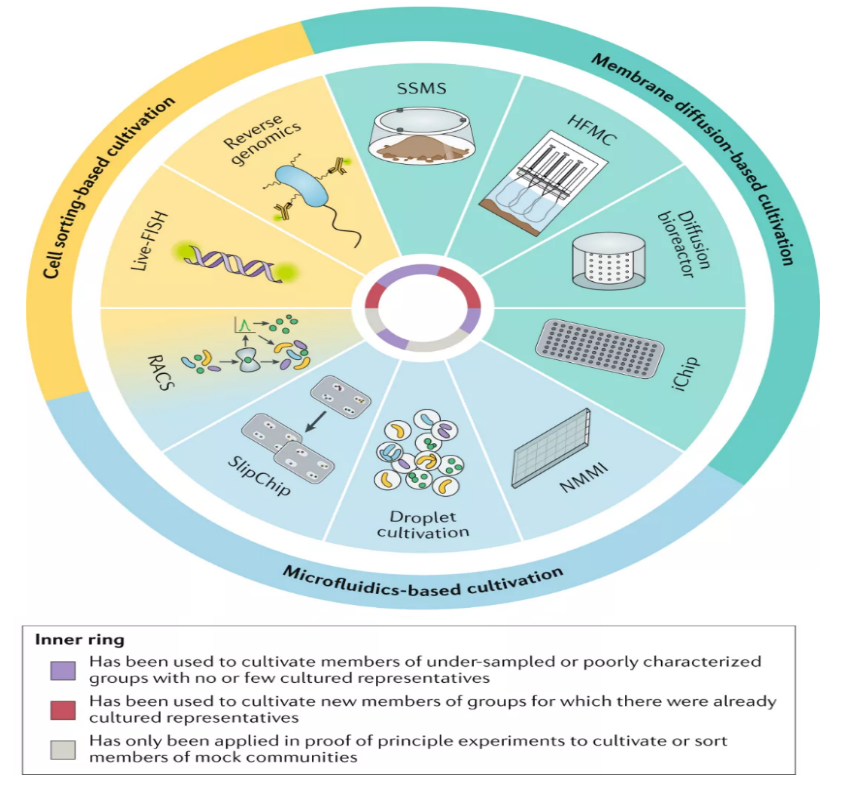 The collection of samples for bacterial isolation started from 2001 (Fig. 10), with specimens from all Chinese coastal areas (i.e. the South China Sea, East China Sea, Bohai Sea, and estuary areas) and the vast oceans (Pacific, Indian, Atlantic, North Sea, and Polar area). The types of samples include sediments, seawaters of the surface and of a depth of more than 6000 m and the samples from special events, such as the hydrothermal solution from Kuishan Island. In addition to cultivation at the first time abroad or in situ, all samples were mixed with 20% of glycerol and frozened till further cultivation. 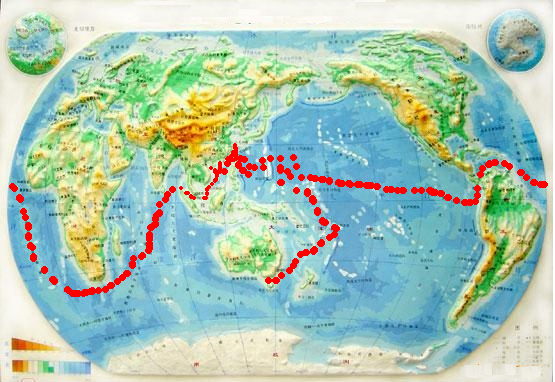 Fig.10 The samples for bacterial isolation

The isolation can be achieved with different designs (Fig.11). Normally, they are straight streaked and cultivated at room temperature with specific media. The media were designed to meet the ordinary growth of marine strains, like 2216E and M9. Also, some agents like amino, NO3-, S2O32- were added to replace the substrates. Some samples were spread or cultivated under anaerobic conditions (Fig.12). To date, about 3300 strains of microbes have been isolated and preserved under conditions of -80℃ or liquid nitrogen. 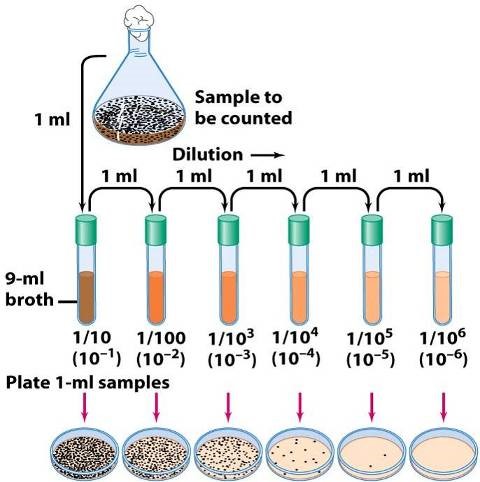 The strains isolated were documented and morphologically described during preservation. Then the subcultures are subject to further analyses by 16S rRNA gene sequencing. The results are documented as the preliminary classification. If needed, the strains would be further analyzed with the following items: enzyme activity, carbon utilization, fatty acids, polar lips, respiration quinones, cell wall components, genome and other tests like antibiotics, requirements of specific elements. The overall procedure is shown in Fig.13, and 2000 strains have been subjected to the preliminary classification. The analysis of 16s rDNA sequences showed the strains belong to 216 genera within 7 classes, and the strains may be subclassified into 468 units or species (striains). 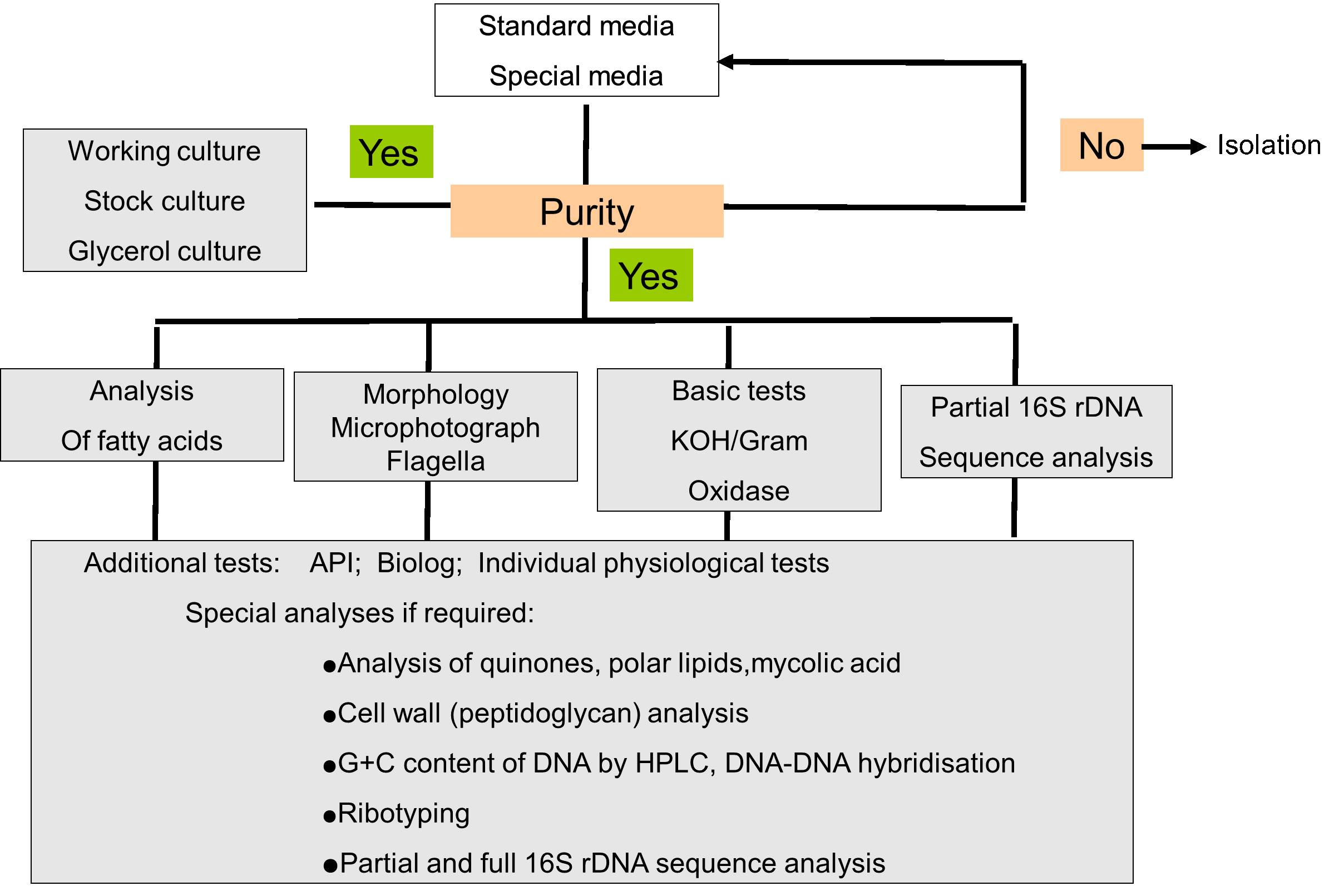